Simplifying Fraction is not as hard as You Think!

Sometimes we may have some misimpression about fraction especially on how to simplify it. We may even wonder why we have to simplify it. Can we even do the calculation without the additional steps of simplifying it? Some may think that it is really difficult and it is true. It is difficult when we don’t know how to do it. It is difficult when we don’t have the necessary knowledge to begin with. But in this post, I will show some of the techniques on how to simplify fraction easily so that you will believe that simplifying fraction is not as hard as you think!

First I will show my technique on how I simplify fraction. For example, the fraction is 6/8. By looking at it, you think if both numerator and denominator are divisible by two or not. This is what I called “guessing style with two or three”. The fraction 6/8 can simplified to ¾ by dividing both by two using my “guessing style with two or three” technique. This technique is not a standard because it is some kind of a trick but it really helps most of the time. This trick is not applicable to fraction that can only be divided by five or seven. For this technique, when a fraction is not divisible by two then you do it with three. When the fraction is divided by two and the result can still be divided by two or three, continue the process until it cannot be divided anymore. Then that will be the simplest form of fraction.

The first method is called a repeated division method. This is done by listing all the factors of numerator and denominator. When the list is made, you will select the smallest common factor and used it to divide both the numerator and denominator. If the result is not in its simplest form you have to repeat the whole process again until there are no more factors left in the list. In the list, we omit 1 as a factor because using 1 as a factor will give the impression that the fraction is already in its simplest form. So now we will use 36/42 fraction as an example. See the whole process executed below. 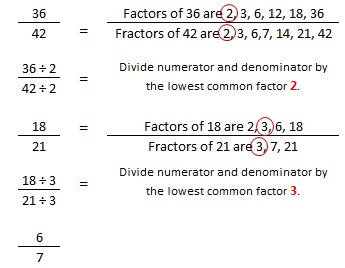