See photo below for parts of fraction. 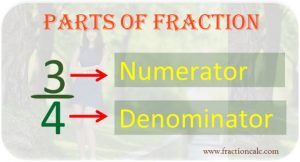 Parts of fraction is introduced in grade school. At first, a student would find it hard to decipher and familiarized its meaning. The teacher, in order to be effective in their teaching, would use a lot of visual aids so that the students would grasp the meaning easily. Mostly, a picture of fruits would be use because student would be attentive enough if the example is food. Later on, the student will find the topic of fraction as interesting as eating several kinds of fruits. So the student will be familiarized with the parts of fraction by imagining it as foods.

When I was in grade school, math subject was my favorite subject and even until now, I am still interested about mathematics. When the topic about fraction had come, I felt it was challenging but later on, I felt I was not fully interested to it because I had to memorize what are numerator and denominator. I had to familiarize the form for several times. I really felt it was a boring topic. This was not happening only to me but it happened to all my classmates as well. When our teacher realized that we are not interested to this topic, she began to use some visual aids which made us interested to the topic. She used a picture of apple, a picture of cake, a picture of candy, and some picture of sweet drinks. So everytime I eat apple, I will remember the topic of fraction. That method was really effective in making me and my classmates familiarized the fraction and its parts.