Fraction can sometimes be compared to another fraction. There are a lot of real life situations where fraction needs to be compared. And when that happens, confusion might arise. How do you compare ⅔ to ¾? Which is bigger of the two fractions? We will learn this below. 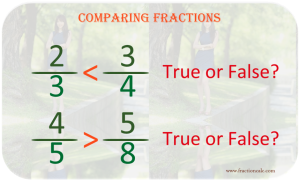 Comparing fractions having both different numerators and denominators